As the 2019 BRILLIANT winners begin to turn their ideas into unique artworks for Lumiere’s 10th anniversary edition, we catch up with 2017 BRILLIANT winner and Durham-based light artist and programmer, Chris Plant.

This week we visited Chris Plant at his top-floor studio in The Empty Shop Think Tank, a visual arts hub in a renovated space tucked at the end of Durham’s North Road to talk about the experience of winning BRILLIANT and the ways his career has evolved since Lumiere. Birmingham-born Chris has been producing videos and animations and creating real time, interactive installations since the early-1990s. He began creating live projections for bands and nightclubs and eventually formed his company, Colour Burst to manage the demand for his visuals. After moving to Durham, Chris entered our BRILLIANT competition, which offers anyone originally from or currently living in the North East the opportunity to submit an idea for an artwork at Lumiere. In 2017 Chris proposed Harmonic Portal: a mesmerising, shade-shifting projection combing light, sound and texture to explore the way our brains create a seamless colour spectrum from the three frequencies of light our brains can perceive. The finished piece, which illuminated the walls of St. Godric’s Church was an audience favourite at Lumiere in 2017 and is back in Durham this year as part of the 10th anniversary programme. 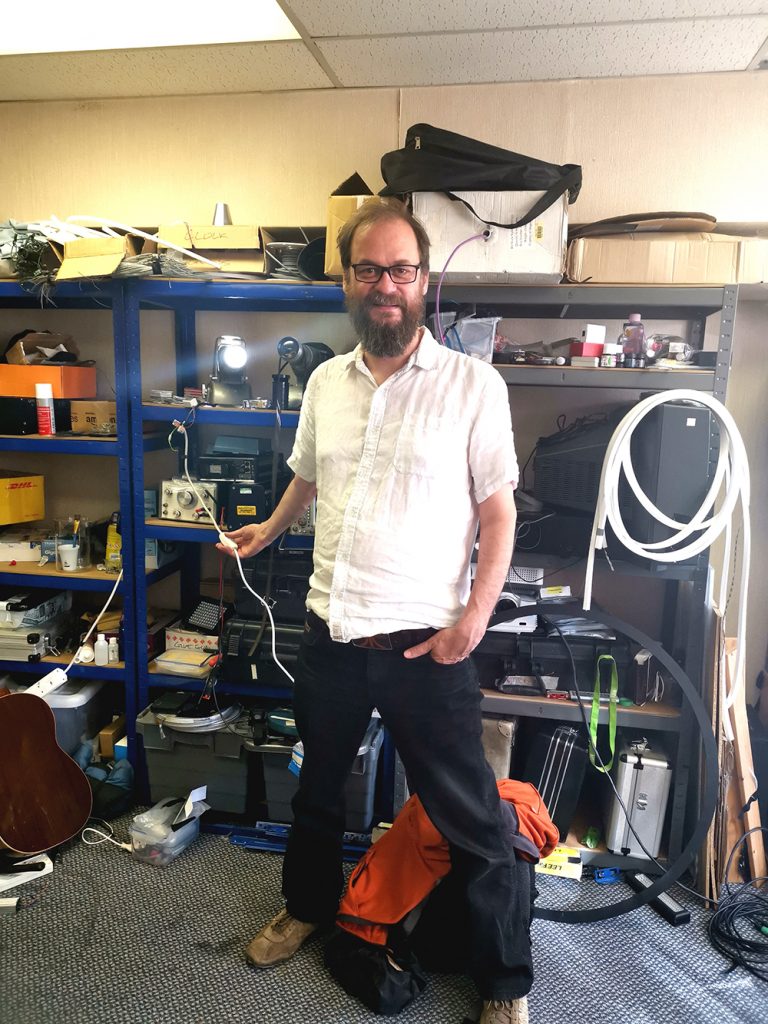 Chris Plant, in his studio at TESTT, Durham, 2019. Photo by Nia Shaw

To start, tell us a bit about yourself and the visuals you create?

I started out as a musician and later I did an art course and became interested in projection. I couldn’t get onto a degree course that would let me do that, so I carried on playing in bands and started creating projections for gigs. Then we started working in raves, which was a new thing then. That took off and I was working two or three nights a week doing projections in night clubs. I started off with slides and 16 mm, which was all quite analogue and by the mid-90s I moved into video and started working with computers and interactive graphics. Now I do a mixture of programming and more arty things like making video installations.

Would you say that you’ve always been a creative person?

Yes, definitely. I’m not quite sure what I would have done if I hadn’t been!

Could you describe your creative practise in three words?

The main things that my work involves are motion, colour and emotion. I’m trying to evoke emotional responses in people using colour and time. Quite a lot of my work is about trying to create that meditative mental state. 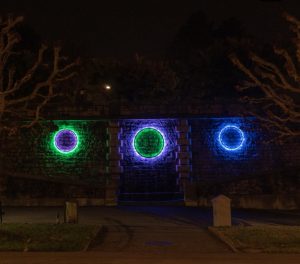 Yes, I can definitely see that hypnotic quality in Harmonic Portal. How have you developed that work since exhibiting it at Lumiere in 2017?

Since Lumiere, I’ve made some larger versions which are in Geneva now for the Geneva Lux festival and they commissioned me to create a five-year recurring piece, which is really great.

Did you have to adapt Harmonic Portal much when it was showcased at Lumiere London last year?

No, but we did spend a long time trying to find a wall in London which was weathered enough. I’d been looking at the walls around Durham and some of them are so spectacularly textured, I started to think about how to light things like that. It actually reminded me of one of the artists I’ve been quite influenced by, The Boyle Family. They did a project called ‘Journey to the Surface of the Earth’ where they randomly threw darts at a map of the world and made fibre glass casts of the ground and photo-realistically painted them so they  looked like a piece of the ground. In a way the portals remind me of this, in that they create a frame around something real. They almost magnify the surface and make you look at it in a different way. 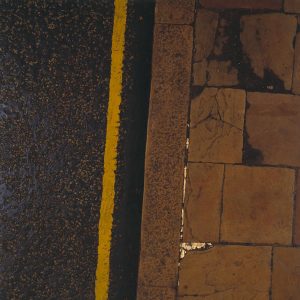 As a digital artist, do you think that digital technology is changing traditional ways of looking at and thinking about art?

I think it’s definitely changing the way we make art. I use the term digital artist quite broadly because not everything I do is digital and my background is slides and stop motion film. I started using digital tools because they were cheap and portable, but digital technologies have certainly absorbed all of our lives. Most artists now use digital tools in their work, whether it’s typing on a laptop or digital photographs. It’s become quite blurred. I’m glad that digital art has become accepted in the art world because for a long time it was overlooked.

You mentioned the Boyle Family. Are there any other artists that inspire your work?

Yes, I like David Nash sculptures. I like Andy Goldsworthy and I’m influenced by Len Lye and his use of colour and rhythm. I love a lot of the early animators, that’s kind of what got me into making video. And music as well, sound is a big part of my life and always has been and certainly I really like the way that sound and vision work together. 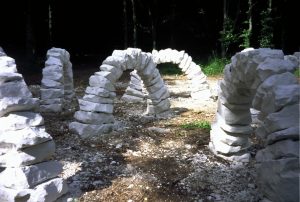 Andy Goldsworthy, A Clearing of Arches. For the Night, Sussex, 1995. Photo courtesy of the artist

A real mix then, from land artists to musicians. Harmonic Portal incorporates sound as well as visuals. Which did you create first? The projection or the soundscape?

I first imagined it as a light piece and then I made these tubes [gestures to plastic tubes in studio] which produce sound through a sonification process of the colours in the tubes and I thought I would try the same process for the portals. As soon as I turned on the sound it was just like falling into a tunnel. It definitely needed sound!

And what is it about light that appeals to you as an artistic medium?

It’s not the most modern art form, but it’s how we perceive the world and it’s only recently that we’ve been able to control light in a really defined manner, whether that’s projectors, video-mapping or the screens that we look at every day.

What kind of emotions do you try to evoke through your works?

With Harmonic Portal I was trying to create a meditative state and I was thinking about how the surface receives light, how shadows are formed and how our brains perceive light. It’s about how the colours change as they move against each other, like this constant flux. You’re looking for repetition within it and it draws you in because it’s cyclic but there are loops within the loops, so the loop time is in hours, or days even. 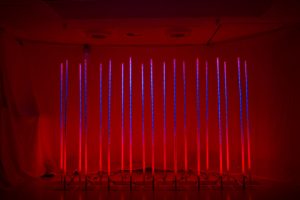 What was it that inspired you to apply for BRILLIANT in 2017?

I came to see Lumiere in 2011 and I had such an amazing time. I wasn’t living in the North then, but my partner is from Durham and so we went because her mum had been the previous time. It was so good to see so many people in a town in the middle of winter looking at art and everybody being excited by it as well! It’s just a wonderful thing, so I came to Lumiere twice after that and then we finally moved up here.

What were the challenges of creating an artwork for such a large, outdoor event?

Water-proofing was the biggest challenge really, to try and make something robust enough to withstand days in not just rain but also freezing temperatures, because that can cause issues with expansion and water ingress. If a little bit of water gets in, electronics can just start behaving a bit randomly, which is not what you want.

What did it mean to you to have your work shown publicly in Durham?

I loved it. It’s great getting a wider range of people seeing work and having to make their minds up about it without having any knowledge of what to expect. That’s one of the wonderful things about Lumiere, that people are walking around a getting all these kinds of different input and deciding whether it moves them or not. Also, it’s great being able to talk to people because quite often my work is performative because I’m controlling things live, so I don’t often actually get see people experiencing them. It’s fascinating seeing people being drawn to touch the wall because it makes you want to go and feel the texture. I think drawing people’s attention to the everyday is a great thing. 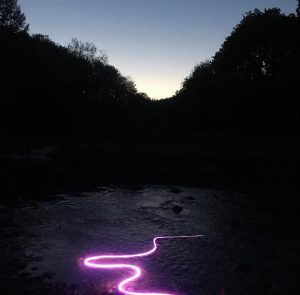 How do you feel your career has developed since you first exhibited at Lumiere in 2017?

Since Lumiere I’ve been focusing on my own work rather than on collaborations with people which is good and about time. Certainly, some of the bigger projects I do have to be collaborations because the logistics are ridiculously big, but it’s been really nice to actually make something that is an art object in itself rather than a moment in time, because so much of the work I make is temporary.

What does it mean to you that Lumiere is returning for its 10thanniversary this year?

I can’t wait to see what’s programmed! Lumiere is especially amazing in Durham because the theatre of the city is so picturesque and full of history. I’m sure this year will be fantastic.

Lumiere returns to its birthplace in Durham for a spectacular 10th anniversary edition on 14th– 17th November 2019. 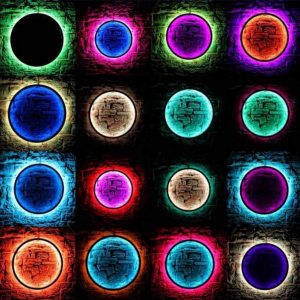