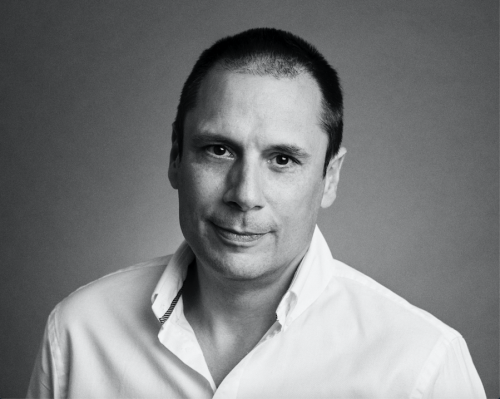 Matthew Andrews has captured every Lumiere festival on camera since it first began in 2009. To mark one year until Lumiere returns to Durham in 2021, we’ve collaborated with him to create a special behind-the-scenes online exhibition of his photographs to tell the stories of the people who make Lumiere happen.

TELL US A BIT ABOUT HOW YOU GOT INTO PHOTOGRAPHY.

I was given a camera as a child and in the beginning was simply interested in seeing how things looked in pictures; something I still find completely captivating. At school I took O- Level Photography alongside my A-Levels and had access to a darkroom for the first time. After enrolling on the Graphics course at the St Martins School of Art, I soon fell into the orbit of the photography department and was taught by Dermot Goulding and photographer Sandro Sodano who I assisted for a time shooting fashion accessory work for Paul Smith.

I had my own studio in Spitalfields in the early 90s, but have always preferred working out of a bag on location. I built up clients in the arts like Faber & Faber, Southbank Centre, Arts Council England, British Council and some others and not long after moving to Brighton, I began working on Brighton Festival which I shot for a decade.

HOW DID YOU FIRST START WORKING WITH ARTICHOKE?

At Brighton Festival I met Nicky Webb who founded Artichoke with Helen Marriage and they invited me to photograph The Sultans Elephant (2006) in London. That project was on another scale entirely and I worked with the photographer Sophie Laslett to document the event for press and marketing. It was an exhilarating project to work on but looking back its scope was so vast that it was hard to get under its skin in the way I would have liked.

La Machine in Liverpool (2008) afforded that opportunity though in spades and was the first time that I’d produced a set of pictures that met all of the marketing and comms needs and which also had a coherence and wholeness as a project in photographic terms. There is an edit of that project on my website twelve years on.

The first Lumiere followed a year later in 2009. I think of it as a smaller festival – but looking back, its scale and ambition is all there together with really high-quality work from a roster of international artists. Over the years the festival has grown and become incredibly popular but it has always stayed true to its ambition to present thoughtful and engaging work of real quality and value for free.

WHAT IS AN AVERAGE DAY LIKE FOR YOU DURING LUMIERE?

I tend to work into the small hours, especially during testing before the festival opens and while artists and technicians complete installations. That time can be great for pictures. During the four nights of the festival, I’ll work until switch off and then head back to the hotel to start editing and processing the files and that usually takes until 3 or 4 in the morning. Like the rest of team, I work long nights during Lumiere and it’s really important to stay on top of editing and captioning and get new work supplied quickly. I still get a thrill from seeing my photographs in use for the project.

HOW DO YOU PREPARE FOR LUMIERE?

The festival is more than a year in the making but around the time the programme is announced I meet with the Communications team to talk about particular artworks – when they might be tested and installed and how I might go about getting a head start on pictures. Also, when particular artists will arrive at the festival and whether they will be available to photograph while they work behind the scenes, my pictures of Fujiko Nakaya and her artwork Fogscape #03238 (2015 & 2019) are a good example of that. 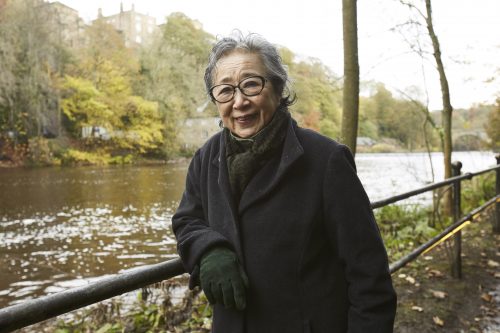 We establish any artworks which need to be photographed urgently and then I draw up a plan and working schedule around that. I plan my schedule quite tightly and try to stick to it. That said there is a certain amount of serendipity involved. I think photography can be like fishing in that sense. I like to visit and revisit artworks over the course of the festival, there might be something not quite right one night so I’ll go back and there might be an especially good audience scene for example.

I love the idea of a total or immersive documentation of work, covering pieces as they are assembled through to completion and switch on. 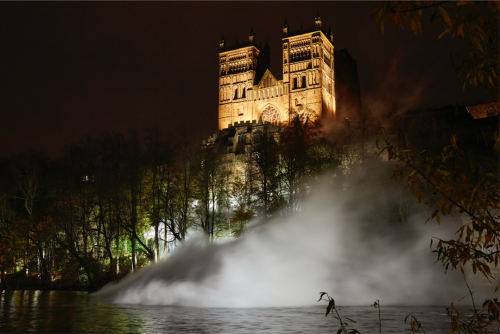 WHAT DO YOU ENJOY MOST ABOUT PHOTOGRAPHING LUMIERE?

I always loved taking things apart to find out how they work and I think working on Lumiere for so long has, in a sense, allowed me to do exactly that. The festival is a year in the making and I tend to begin shooting in Durham a week before it opens to the public.

Each year it’s the same, I promise myself a quiet walk to take in what’s going on the night I arrive but it never works out that way. There’s always something to shoot among the riggers and cherry pickers. Something catches my eye and I’m up shooting until the small hours, bags dumped in the hotel but not unpacked. I try to find little stories, vignettes, a tide of artists and technicians, cranes, cherry pickers bleeping through the night, miles of cable. But for all my love of process and getting behind the scenes I’m still a long way from being immune to the transportive power of art.

IS THERE ANYTHING YOU KNOW FROM PHOTOGRAPHING BEHIND-THE-SCENES THAT YOU THINK WOULD SURPRISE SOMEONE IN THE AUDIENCE?

I think people would be surprised at quite the amount of work that goes into making Lumiere. The festival is more than a year in the making and depends on a mind-boggling number of technicians, producers, artists and volunteers and more to stage the festival, many of whom work night and day to ensure it runs smoothly.

I’ve been fortunate to see every artwork at each edition of Lumiere and it’s absolutely impossible to name a favourite. However, a set of pictures I keep returning to is Companie Carabosse testing their artwork, Spirit (2011) and one test in particular. It was a very special thing to witness, a sort of lambent hush as the sphere was lit and hoisted in the Cathedral’s Crossing Tower.

Something else I really love about Lumiere is that while it’s well known locally, nationally and internationally for its large-scale spectacular pieces, there are wonderful quieter pieces which are positioned so that you can find them if you want to. I’m thinking in particular of pieces near Prebends Bridge, the understated White Line by Adam Frelin (2017) and more recently, Geometrical Traces by Javier Riera (2019). 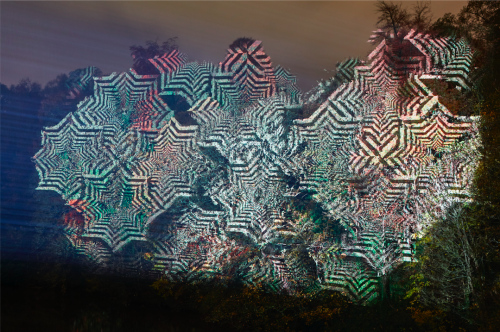 A lasting memory will always be Ron Haselden’s Echelle (2009). The artwork was installed again in 2019 in a yard off Saddler Street and you had to peer through a hatch in a heavy door to see it. As the Festival closed in 2019, the door had been left open and lying nearby was another ladder, this time the climbing kind, a cousin to Ron’s neon Echelle. It was a great image to end the weekend with.

WHAT IMPACT DO YOU THINK LUMIERE HAS HAD ON THE COMMUNITY?

In 2019, I was in Pizza Express on Saddler Street, at the next table were four people having an early supper before lighting up time. They raised their glasses and wished one and other “Happy Lumiere”. I take that to mean that Lumiere is not just a success in terms of an arts festival but as an important event in the calendar. To my mind, it has become a part of the fabric and culture of the community.

WHY IS PUBLIC ART IMPORTANT?

In lockdown, many working in the arts have suffered terribly, yet it is the creative industries and arts that people have turned to during this time. I think that speaks volumes about the importance of the arts and entertainment industries broadly. The arts are more than important, they’re vital and a large part of what makes us human and a society.

When we’re on the other side of this pandemic, I think public art is going to play an extraordinary role in bringing us all back together and waking us all up. People are going to want to come together and they will likely want to have the experience of the pandemic articulated by artists, so it could play a healing role.

LASTLY, HAVE YOU GOT ANY OTHER INTERESTING PROJECTS YOU’RE CURRENTLY WORKING ON THAT YOU’D LIKE TO SHARE?

During lockdown I began working on a new book about Brighton prompted by a renewed interest in the hyper local because of the pandemic. It’s an affectionate portrait of Brighton, where I live, with a sparkling and well-researched text by the writer Max Crisfield. I spent the summer outdoors working on that. It’s mostly finished and I’m waiting for the lockdown to ease before I resume photographing building interiors. During lockdown II I’ve also been working on a project about heritage and health at St Bartholomew’s Hospital in London. Its focus is around the use of the historic North wing and Great Hall by hospital staff as somewhere to rest and recharge.

All photos by Matthew Andrews