As part of Lumiere‘s 10th anniversary edition, five BRILLIANT artworks from past editions of the festival have returned to instil enchantment into unexpected spots around Durham City. To celebrate, we caught up with Mick Stephenson, one of our first ever BRILLIANT competition winners.

North East based creative talent has fuelled Lumiere from the very beginning. Since 2011, we’ve invited local people to submit their bright ideas for artworks through our BRILLIANT commissioning competition. BRILLIANT is open to anyone originally from or currently living in the North East and so far, 17 winning original artworks have illuminated Durham City alongside works by renowned international artists. This year, four new 2019 BRILLIANT artworks are joined by favourite BRILLIANT artworks from past editions of the festival, including Mick Stephenson’s colossal, Fusion from Lumiere 2011.

Mick Stephenson is a Durham-based building firm boss turned artist. In 2011, his idea of illuminating the architecture of Durham’s Walkergate complex with recycled materials lit up with LED lights was selected as one of our first ever BRILLIANT artworks. Since then Mick has gone on to create artworks for light festivals in the UK and beyond. We met at his studio at The Empty Shop Think Tank, to talk about the transformative effect of winning BRILLIANT, the challenge of bringing Fusion back to Durham and the role of artists as activists. 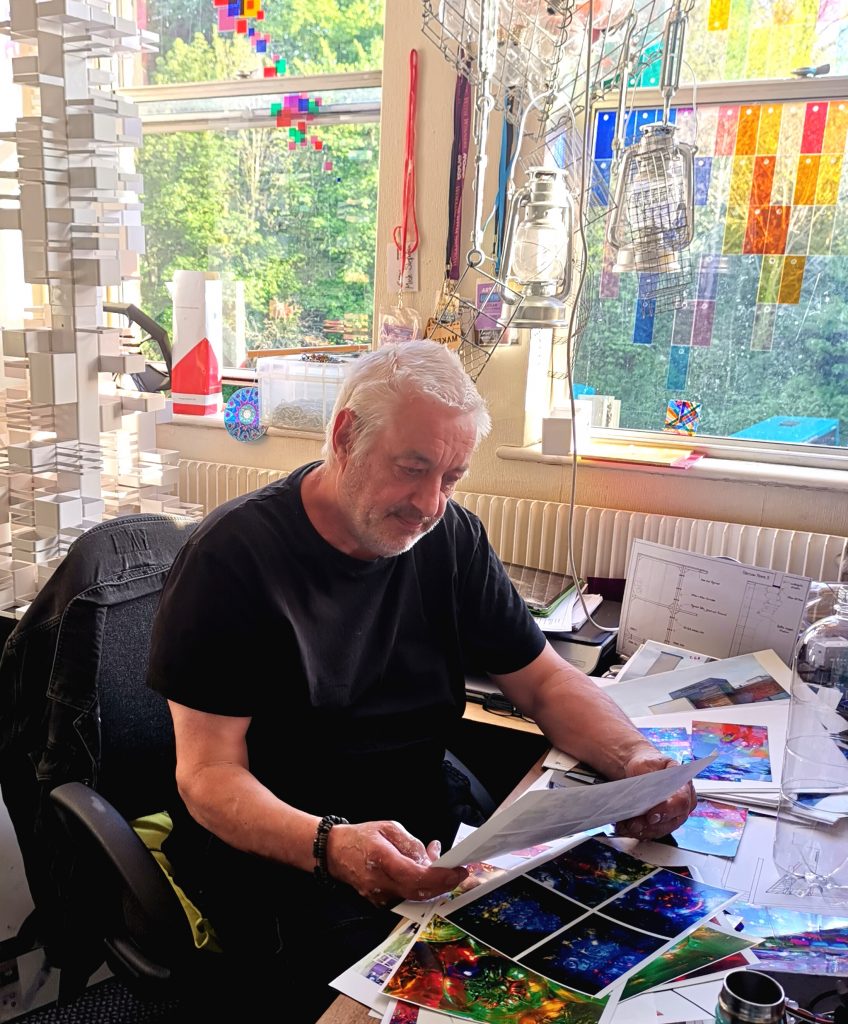 Could you tell me a bit about yourself and your art practice?

From about the age of around 14 I was involved with bands as a roadie. Lighting was my passion, but I also worked in sound and manufacture of professional audio equipment. But by the time I turned 40 I decided that I was getting too old to be touring, so I set up a building company. It was in February 2011 when I applied for BRILLIANT and everything changed. I’ve always been creative, but BRILLIANT really kicked that off. I applied never thinking that I would be successful and it was a shock when I realised I had to actually create this artwork. Now I’ve made around 50 installations, which is incredible.

What inspired you to apply for BRILLIANT in 2011?

When Lumiere arrived in 2009, it was the first time that light installations had appeared in the city. I came on the Thursday night and was completely blown away. I just thought, wow I’d love to get into this. It’s ‘rock-n-roll’ really isn’t it? It’s just incredible the transformation and the idea of closing parts of the city to allow art to take over. It was in the February of 2011 after the second edition Lumiere had been announced that I applied for BRILIANT. 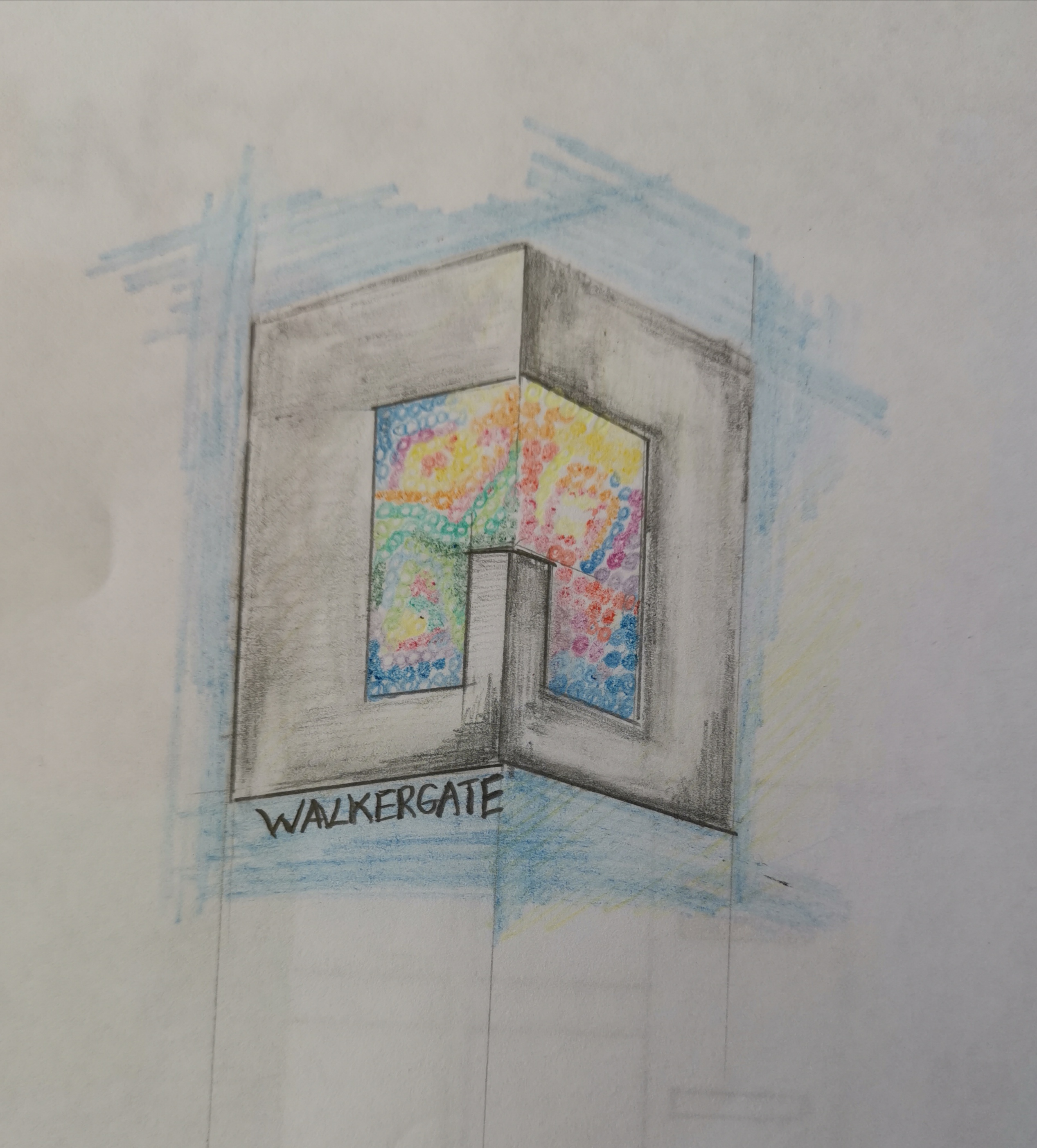 How did you come up with the idea for Fusion (your winning BRILLIANT artwork)?

It actually came to me while I was walking through Lumiere in 2009. I had this idea of hanging loads of little plastic bottles down by the trees by the River Wear. Then part of the application process was choosing a location and my proposal was to fill an alcove in the Riverwalk architecture with recycled materials.

How did you create Fusion?

The first thing I did was to see whether the concept of sticking LED lights in plastic bottles would work. Then it was the collection of recycled materials. We used straws, disposable razors, plumbing pipes, plastic bottles – it really was rubbish. I asked friends, family and all of my contacts in Durham to start saving their plastic bottles. And then people started to really care, they would wash all the bottles and take all the labels off. Once people realised we were making a piece of art, we just got overloaded with thousands and thousands of bottles. Fusion belonged to a lot of people, not just to myself.

What was the most challenging aspect of the process?

Well, one of the biggest problems with that site is that it’s a bit of an optical illusion. It looks a lot smaller than it is and nobody knew the exact measurements. I tried to get the site plans and in the end I just and measured it myself. I suddenly realised it was actually 5 meters high and 32 square meters. Where could we build something this huge? I took all of our furniture in my house upstairs so that we could build downstairs. It really was a test. We made it in 9 sections, but we had to make it look like there was no join which was very technically challenging.

Almost every artwork you’ve created has been made using recycled materials and most of your works have been exhibited publicly. As an artist, do you feel that you have a responsibility to inspire action against climate change?

Yes, there is a sense of responsibility. I’ve always thought about it as a responsibility to children, because they get it. They ask the right questions and if you’re doing something wrong, they’ll tell you. One kid asked me, if we’ve got all these problems with plastic bottles why are we making art out of it? I said, you’re right. I think we’re up against a wall at the moment. It’s all very well to retrieve the plastic from the land. But what do we do about trying to retrieve all of that material from the bottom of the ocean? We’re in for a very interesting year.

The idea of making art just for entertainment has gone. It needs to have a real powerful message behind it and needs to connect with people. Hopefully Fusion’s message is that the things we throw away can be transformed into something beautiful. 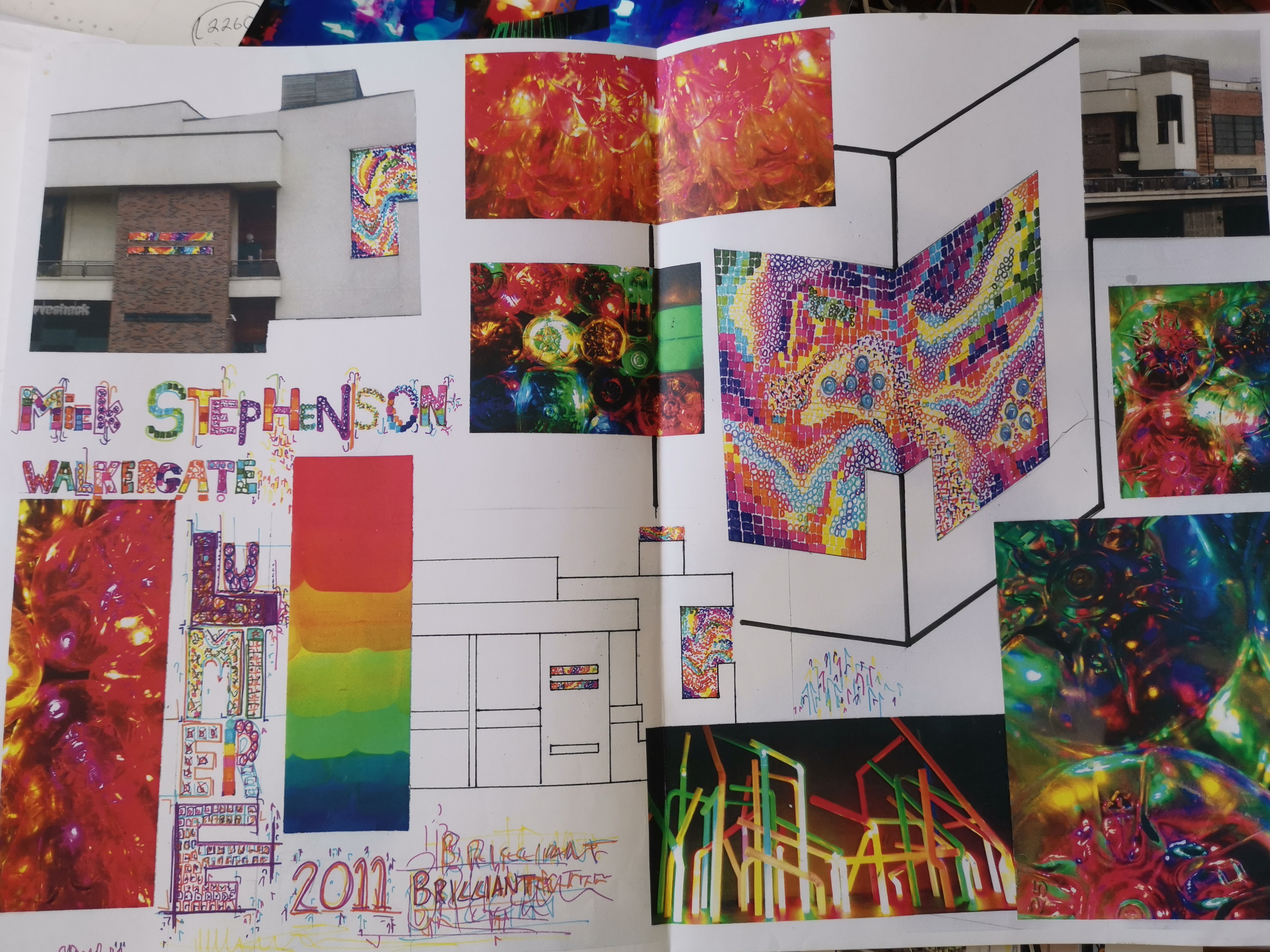 How do you feel that Fusion has been selected to return for Lumiere’s 10 year anniversary?

Absolutely delighted! It’s wonderful. Probably 6 months ago I got an email. It’s a piece that’s only ever been shown at Lumiere and then I showed it once in a gallery afterwards in pieces. But, it hasn’t been shown again in its full shape since 2011. I feel very privileged because this is Lumiere number 6 for me, 4 Durham and 2 London, so it’s been an incredible journey. I’m very excited to be putting Fusion back in.

What does it mean to you that Lumiere is 10 this year?

Durham would be a very different place without Lumiere now. It’s kind of set the bar for what happens in Durham. The idea of taking the gallery out into the streets and giving the city back to the people is a wonderful thing. It’s probably been one of the most significant things to happen in Durham in the last 50 years. 2011 was actually one of my favourite editions of Lumiere. I think the projection on the Cathedral (Crown of Light) was the first time many people had seen a projection with quad sound. I saw people in tears while watching the Cathedral projection in 2009 so the expectation just gets higher and higher every the time. Of course everybody becomes an art critic, which is wonderful. Galleries are about a threshold aren’t they? Whether you decide to cross that threshold and go in. For most people I know in my home village, they would probably never do that. But they all come to Lumiere, so if nothing else it just breaks down so many barriers. So many people not just coming for one night but for 2 or 3 and the whole 4 nights. And it’s free. 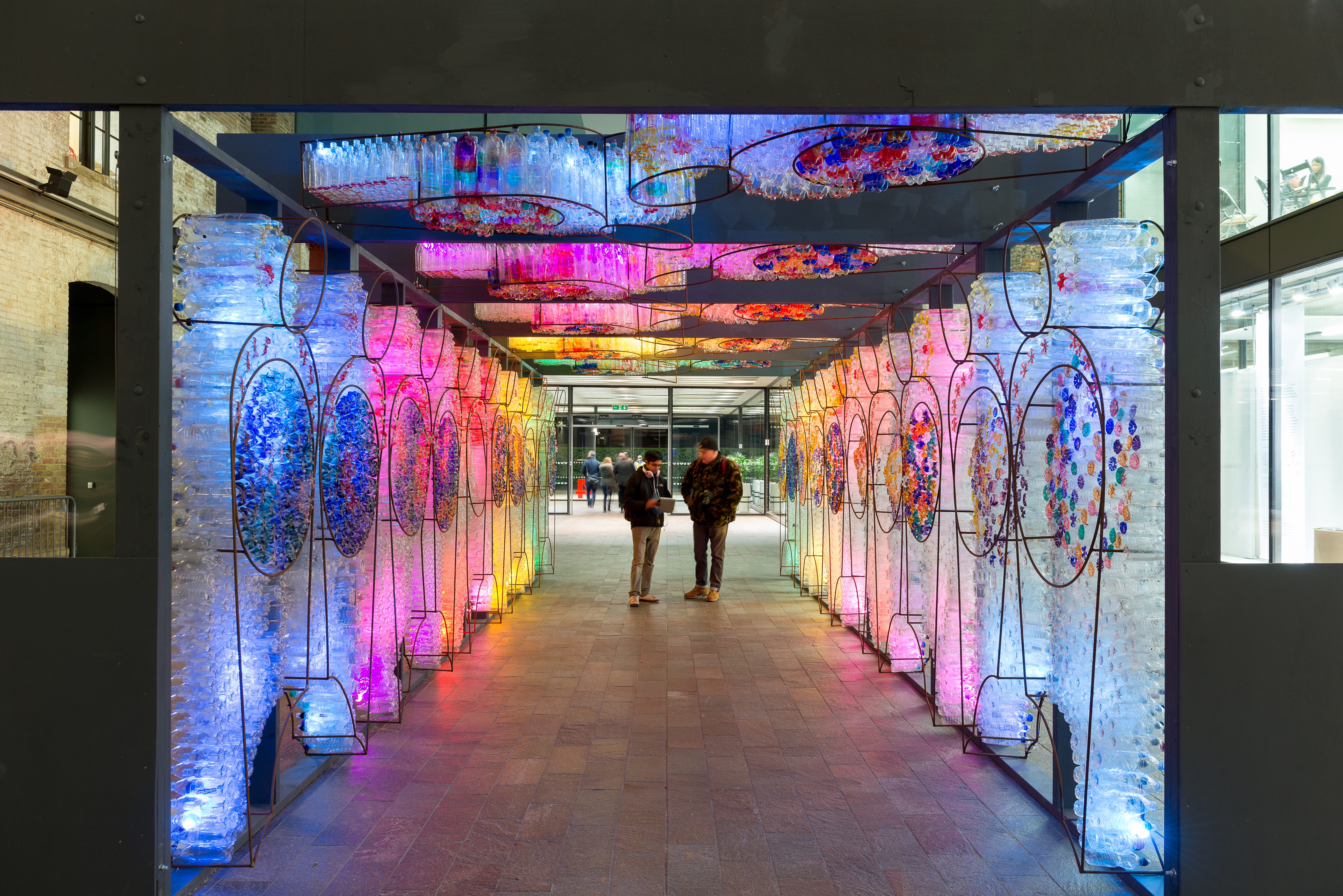 What appeals to you about light as an artistic medium?

I’ve had to think about that a lot and it really goes back to childhood and a back to a simple Christmas tree. That’s probably why I went into ‘rock-n-roll’ lighting, to change the atmosphere and transform a place by adding some colour. For the first time these days we’re actually seeing lighting going into the architectural plans. Now, you go to Newcastle and you see the Millennium Bridge lit up in colour and light festivals are happening all over the world. It’s about the transformation of space, but the excitement for me is the ephemerality of it, which is what is scary about doing a permanent piece of work (for Durham’s new Walkergate complex).

Which is your favourite piece that you’ve created for Lumiere?

I think it has to be The Rose. We pulled it together in 12 weeks, so we were really up against the clock. What’s lovely about these projects is that you give 12 weeks up of your life to doing nothing but one thing. You eat, sleep and breathe the project and every moment is about the artwork. Every day presented new problems, like when we decided that we needed to make a wire cage and Stu learned how to weld overnight by watching Youtube videos. Instead of getting someone in to help, we just took it all upon ourselves. It was full of little moments like that. Just magical. The collecting of the bottles was mammoth task too –  15,000 bottles. 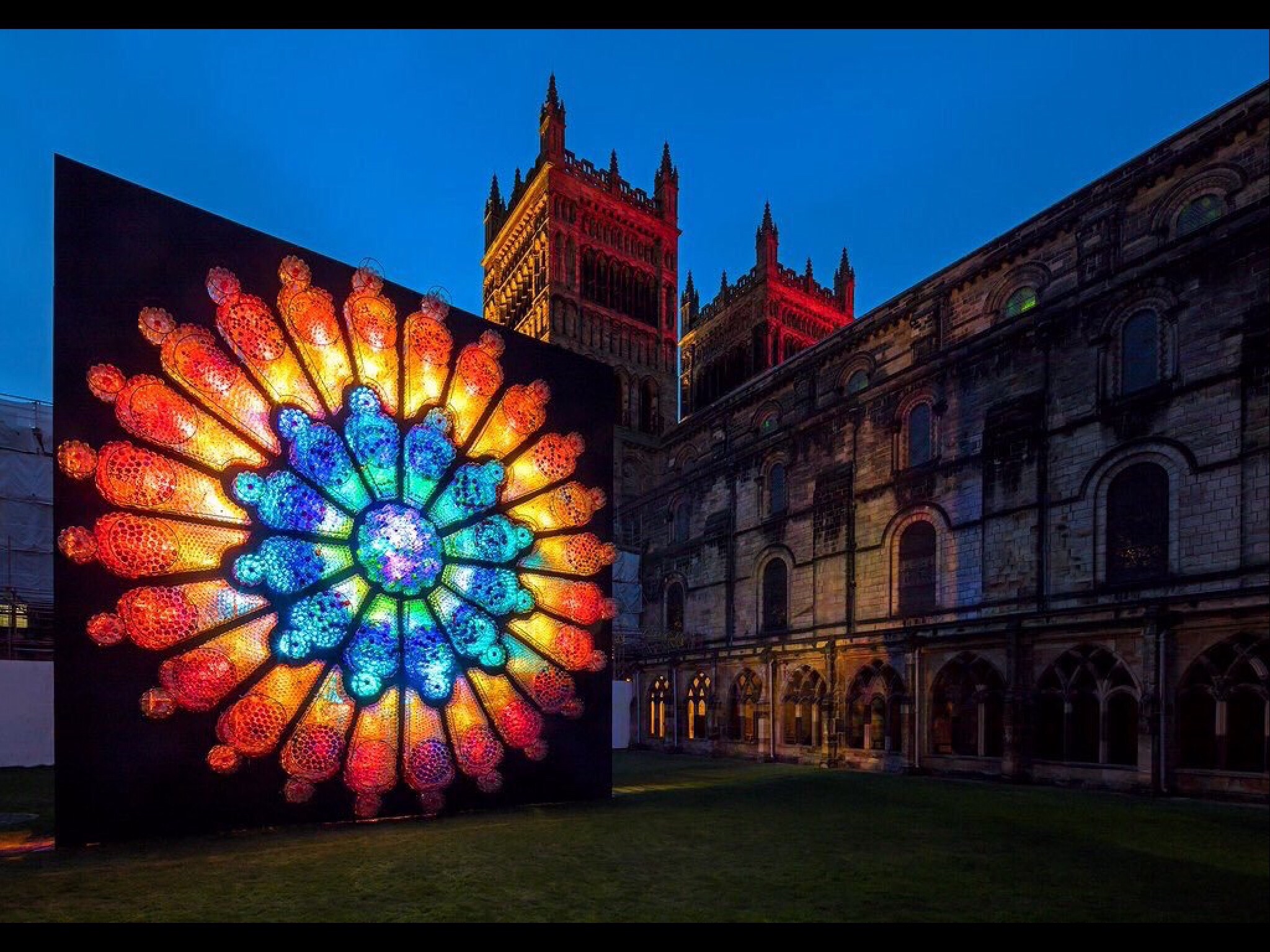 Lumiere is happening this weekend in Durham City (14th– 17th November 2019). If you’re at the festival you will spot Fusion from a distance, glowing on the corner of the Riverwalk complex in the Blue Zone of Lumiere.

Friendship Tree, a new commission by Mick Stephenson is also part of the 2019 programme.